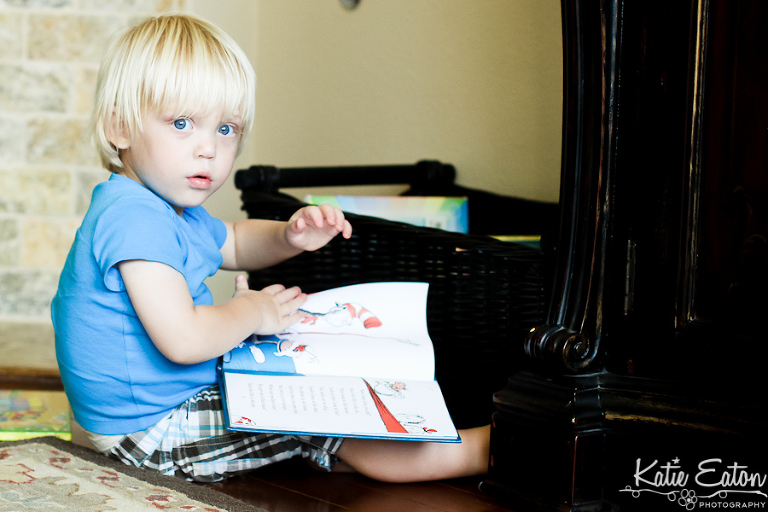 Tyler at two. I know, I know — if I were a really awesome mom, I’d put words all over this photograph like so many of us have seen on Pinterest. But, like many of you, there is little time to blog until nap time or bedtime. And, really, by bedtime, I’m spent!

That being said, my Tyler-boo is growing and changing so quickly I can hardly keep up. I keep meaning to take more videos of his chatter and get out my camera more to catch him playing!  But as soon as I do, he’s on to the next thing!

Tyler is our little picky eater. Lord knows we had to have one! He likes what he likes and will eat it until he’s completely sick of it before he is willing to try something new. For breakfast, he got on a chocolate go-go kick (coconut milk chocolate yogurt … which is really more like dessert, if you ask me). It was ALL he would eat for breakfast. Then it was soy butter … on a spoon. If we put it on the bread, he’d lick off the soy butter and toss aside the bread. I had to get him off that particular kick by no longer keeping it in our house. It was a three-day-long temper tantrum that I’d rather forget. And now it’s waffles so long as they are covered with syrup. I think he likes waffles the best because his sister makes them for him. I gotta say, it’s completely adorable how she makes breakfast for him.

For lunch, he prefers cheese puffs, chocolate milk and peanut butter sandwiches … none of which we keep in our house. But, he gets it a few times a week at the gym. Thank God for the Lifetime cafe. If we’re at home, the only thing he eats for lunch is eggs. Sometimes he’ll eat fresh spinach if I’m having a salad.

And dinner, well, let’s just say he rarely eats his dinner. He picks at it, takes a bit or two and then asks for chocolate go-go (which I say no to). So, he goes about playing while the rest of us eat. I figure, if he was really hungry, he’d eat.

Oh, and I can’t forget donuts … he would eat them each and every day if I let him!

He loves trains, balls and construction equipment. I’m pretty impressed with myself that I know what an excavator looks like and what it does.

Tyler lives for routine. Not just his daily routine … but even when we drive somewhere, he points out the same things every.single.time we pass by and asks the same questions. He talks constantly and can find construction equipment all along the drive. “Look mama, big crane.” “Mama, what they doin?” If I answer wrong, then he corrects me.

He is in love with my camera. And one day, I’m afraid that I’m going to put it on the top of the counter and he’s going to pull it down and I’m going to hear a very sad crash. The wooden camera helped … for a few days.

He gets his hair cut every three weeks. I know, it’s long. But we like it.  When it starts getting too long, JT points it out and I make an appointment.

Tyler likes to color — and if I step away to answer a phone call or do anything, he will find something to write with and color on the floors, walls, furniture, etc. He’s not picky. He’ll color on anything. And he’s been on the sad-carpet about twenty times for it and still, nothing is working to deter him from his next masterpiece.

He calls Sabrina, “Bunny,” most of the time but has also been calling her, “abeena.” But, I think bunny is going to stick as a nick-name because she refers herself as bunny. Adorable, if you ask me!